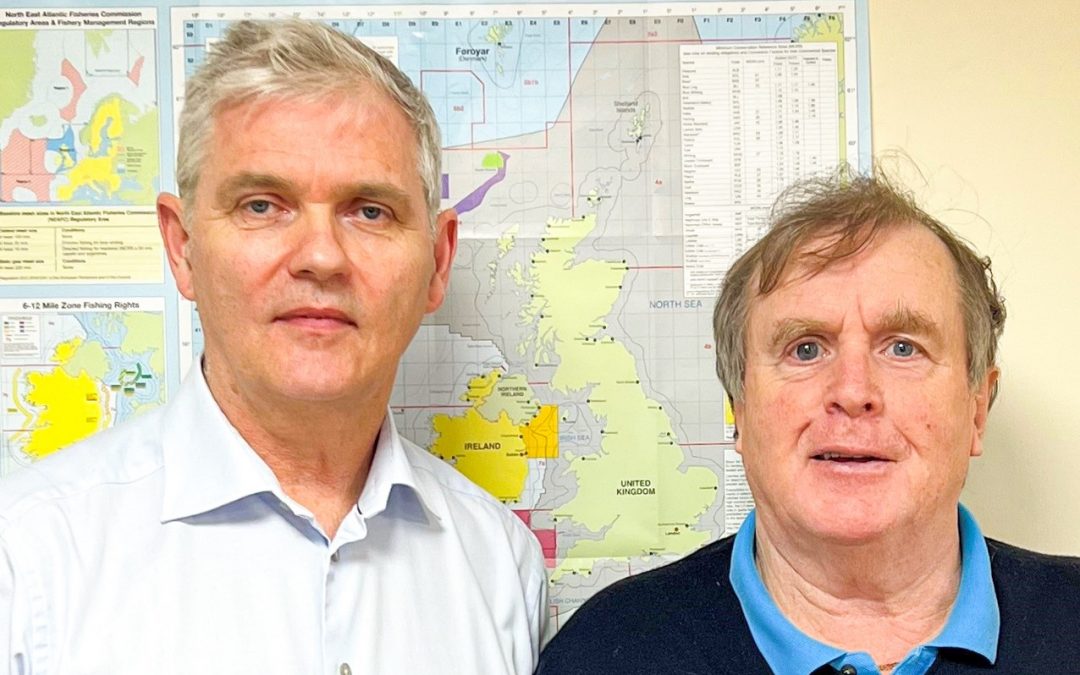 The Irish Fish Producers Organisation (IFPO) has paid tribute to outgoing chief executive, John Ward. Mr Ward has a lifetime association with the seafood sector and retires from his IFPO role at the end of March.

IFPO chairman Niall Connolly, credits John for his 15-year commitment to the organisation and to representing the IFPO effectively in that time. “We all wish John, his wife Sheila and his family a long, healthy and happy retirement.”

Incoming chief executive Aodh O Domhnaill says his immediate focus will be on Brexit’s adverse impact on quotas. “I want to collaborate with other representative organisations on the inequitable transfer of national quotas under the Brexit Trade and Cooperation Agreement.”

Formed in 1975, the IFPO is Ireland’s longest established Fish Producers Group. It represents owners of commercial sea-fishing vessels of all sizes in the Pelagic, Whitefish, Shellfish, and Inshore Sectors.

Outgoing CEO, John Ward, started his career in the early seventies with Campbell Seafoods, later trading as Polar Fish. It was one of Ireland’s main exporters at that time and John advanced quickly into senior production and management roles. He has a wide-ranging knowledge of the entire sector. He is both well-known and highly regarded internationally in European, Asian, & African markets.

John is a keen angler and trout fisherman and serves on the board of the Aquaculture Appeals Board.

Incoming CEO Aodh O Donnell leaves his role as International Sales Director at Errigal Bay to join the IFPO. Aodh also has a long career in the seafood sector. He started out as a youth working with Jarlath Morris at Earagail Eisc Teo, a Gaeltacht based Shellfish Processor. Following Jarlath’s retirement, Aodh took over as CEO and initiated strategic change and innovation, leading the company through a period of significant growth.  Errigal then became one of Ireland’s leading exporters of wild caught shellfish products. In recent years,  Aodh assumed responsibility as Director for International Sales, focusing on Scandinavian,  US and Asian markets – including China.

Aodh has served on several committees including the Irish Fish Processors and Exporters Association (IFPEA) and the Northwest Pelagic Advisory Committee. He served a four-year term as Chairman of Letterkenny Institute of Technology (LYIT). He was appointed by Minister Charlie McConalogue to the board of Foras na Mara, (Marine Institute) in 2021.

In addition to addressing Brexit’s impact, Aodh says he is also aware of the Common Fisheries Policy (CFP) review later this year. “The IFPO has an important role in working in a united front with other Producers’ Organisations in the CFP review. There is an urgent need to strengthen linkages with State and EU Agencies to address Ireland’s paltry share of the Marine Economy.”

“The State is a key actor, and we must increase national awareness of our valuable marine resource, most of which is caught in our fishing waters. We have to work hard and strategically as there is much anger and dismay at the inequitable share of EU Quota (TAC).”

“The drastic reduction in quota, arising from the inequitable transfer under Brexit, is a source of disbelief. Its impacts are reflected around the coast and have created a disastrous situation.”

“Now non-EU coastal states have taken advantage of EU indifference, by unilaterally allocating themselves massive increased quotas.  To make matters worse, in an attempt to mitigate Brexit losses, we are now encouraged to permanently decommission approximately 30% of our demersal fleet.”

“It is time for the EU Commission to take account of a legacy of failed policies and deliver their stated strategy of implementing sustainable social policy objectives. We must work urgently at all levels to address the negative socio-economic impacts of these retrograde EU policies on our peripheral coastal communities.”